Skip to content
December 6, 2017 Corey
Accents and Rebounds is the lesser-known, but equally as important and useful little brother of George L. Stone’s Stick Control.  It’s a great book, but if you’re just playing through the exercises within it like an “Accent Tap” exercise of a high school drumline, then you’re not quite realizing it’s full potential.

To get the most out of the book we must remember that there are four distinct strokes that make up the majority of drumming: The full stroke, the upstroke, the downstroke, and the low stroke or tap stroke.

The full stroke, as the name suggests, covers our full range of motion.  It begins from a raised position, is thrown down into the drum and allowed to rebound back up to the same position at which it started.  This gives us a nice full sound, and if we’re playing multiple high notes in a row, it saves us the trouble of having to lift the stick back up into playing position.

When using the downstroke, we stop the stick before it is allowed to rebound so that the stroke ends low to the head of the drum.  An important thing to remember is that until after the stick strikes the head there is absolutely no difference between a downstroke and a full stroke.  We throw the stick downward from a raised position and then apply a little pressure to the stick AFTER it strikes the head.  If you squeeze the stick before it hits the head you will choke off your sound, and in the long term probably hurt your wrists or forearms.  We use this stroke when we need a low stroke immediately following a larger stroke.  Without it, the stick would be in a raised position and we would first have to lower it before we could execute our low stroke.

The upstroke is the opposite of a downstroke.  This motion starts from a low position and ends up high.  Use as much rebound as you can to get the stick back up to the raised position, but you’ll most certainly need to give it a little help.  It’s not going to make it all the way to the top on it’s own.  Again, the use of the upstroke is the same as the downstroke, but in reverse.  If we need to play a larger, more powerful, stroke following a low stroke, putting that upward pop on it puts us in better position to execute the next stroke.

And last but not least the low stroke.  The low stroke, or tap, is essentially just a full stroke, but played at a much lower height.

As you’ve probably gathered, the whole purpose of these different strokes is to economize our motions as much as we can to maximize fluidity around the drums.

Let’s look at a practical application using paradiddles.  If we were to play each note of the paradiddle at the same volume, we would use full strokes, whether they be high or low.  But if we add an accent to the first note of each paradiddle, everything changes.

Our first note would need to be a downstroke, because we’d want to start high to achieve the accent, but we’d want to stop the stick low to the head in preparation for the next right hand which is low.  The second note would then be an upstroke.  It’s not accented, so we want it low, but the next note that hand will play, after the double strokes, will be an accent, so we need it up high.  And those two doubles will simply be low strokes.

If we apply this concept to Accents and Rebounds, the book becomes far more useful.

Let’s break down the first example:

Of course, when the stickings change it also changes the type of stroke needed.  I went ahead and did the whole first page for you to get you started, because that’s the kind of guy I am.  E-mail me if you’d like a PDF. 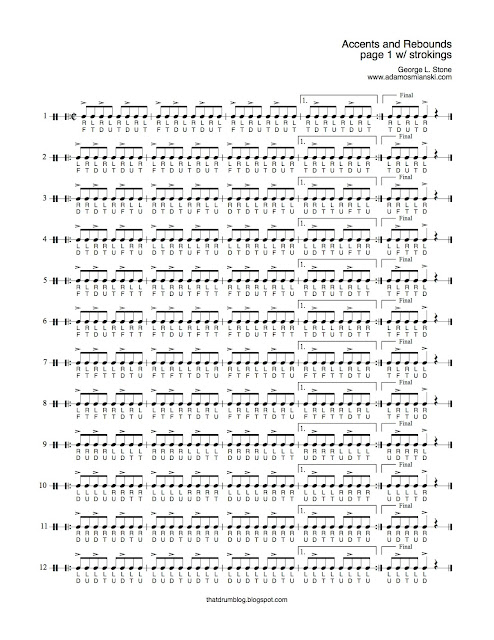 In spending a little time breaking these examples down one stroke at a time and playing them really really slowly, focusing on the mechanics of each stroke, I found that my motions became smoother and more effortless, and as a result I got faster.  I recommend writing in the strokes and really focusing on them for awhile.  Eventually choosing the correct stroke to apply will become second nature and you’ll be able to move through the book more quickly.  Do be careful though, as much like Stick Control, you can easily go overboard with this and run it into complete tedium to the point where the amount of time you’re putting in is far disproportionate to the results you are getting.